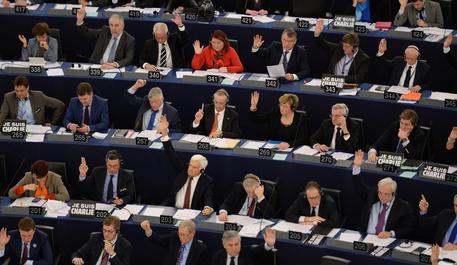 (ANSA) - Rome, January 15 - The European Parliament in Strasbourg on Thursday approved a resolution on the case of two Italian marines accused in India of killing two Indian fishermen during an anti-piracy mission in 2012. The motion called for, among other things, the pair to be allowed to return to Italy, saying that holding them in India without charges was a "grave violation of human rights".
The resolution also called for a fast solution and a change of jurisdiction, saying it should be put in the hands of Italian justice or go to international arbitration, while expressing profound sadness at the fishermen's deaths.
Before the vote, Federica Mogherini, the European Union's high representative for foreign affairs, said that the drawn-out case risks hitting EU-Indian relations. "We share values and strategic interests with India and we want to cooperate in the world arena," former Italian foreign minister Mogherini told the EP.
"But it's good for everyone to be fully aware of how much of an impact the unresolved dispute of the two Italian Navy officers can have on relations between the EU and India. It is putting them to the test".
The case has severely strained relations between Italy and New Delhi for three years.
Marines Massimiliano Latorre and Salvatore Girone are accused of killing fishermen Valentine (aka Gelastine) and Ajesh Binki after allegedly mistaking them for pirates and opening fire on their fishing trawler while guarding the privately owned Italian-flagged oil-tanker MT Enrica Lexie off the coast of Kerala on February 15, 2012. Girone had been barred from leaving India, while the Indian Supreme Court on Wednesday extended by three months a permit for Latorre to stay in Italy for health reasons.
Rome requested an extension after Latorre had heart surgery last week. India granted Latorre four months of leave last year after he suffered a stroke.
Rome has protested the many delays in the case. Formal charges have not yet been presented. Italy successfully fought to ensure New Delhi took the death penalty off the table and dropped the application of a severe anti-terrorism, anti-piracy law, which it said would have equated Italy with a terrorist state. Rome argues the case is not in India's jurisdiction as the incident took place outside the country's territorial waters. It also says the marines should be exempt from prosecution in India, because they are servicemen who were working on an anti-piracy mission, and allowed to return home. The EU, meanwhile, has said the dispute endangers international anti-piracy efforts. "The European Union intends honour its commitment to the full, concrete protection of the fundamental rights of its citizens, of any European citizens detained in any part of the world, promoting the peaceful resolution of international disputes and the respect of human rights and international law," said Mogherini. The case has generated strong feelings in India.
But the Indian government recently said it was considering an Italian proposal for consensual solution to the dispute and Indian English-language newspaper The Economic Times said in an editorial on Thursday that it might be best to let the marines return home.