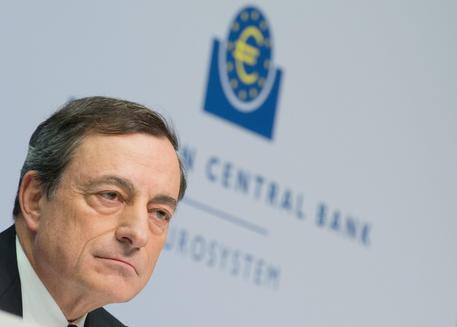 (ANSA) - Berlin, January 14 - European Central Bank President Mario Draghi suggested Wednesday that German critics must accept that the ECB has a eurozone-wide mandate to maintain price stability and cannot favour one country's views.
Draghi signaled to German newspaper Die Zeit that the ECB is ready to buy government bonds to fight deflation, adding that to achieve this, "options are not infinite".
His comments were published as a top European court's advisor said an earlier ECB bond program needed only minor tinkering in order to fall in line with European Union rules - a signal in support of future quantitative easing (QE).
In the newspaper interview, Draghi warned that although the risk of deflation in the eurozone remains low, it is still higher now than it was one year ago.
The ECB adjusts interest rates to keep inflation at about 2% but it has been well below that for months.
December figures from Eurostat showed the eurozone as a whole slipped into deflation, falling below 0.2% on an annualized basis.
Central bankers have been alarmed at how low prices have fallen in much of Europe, nearing zero at some points, which indicates how slow demand has become and the risk of deflation.
Meanwhile, an earlier ECB bond-purchase program is compatible "in principle" with EU law, said European Court of Justice (ECJ) Advocate-General Pedro Cruz Villalon.
He had reviewed the central bank's Outright Monetary Transactions (OMT) program ahead of a ruling expected later this year by the court.
The OMT program was unveiled more than two years ago but has not yet been used.
Germany opposes QE, which involves buying large amounts of sovereign bonds, while supporters say this is needed to increase growth and avoid deflation in the struggling eurozone.
Villalon said the ECB must have "broad discretion" over the EU's monetary policy, designed to keep inflation at about 2%.
Germany's courts had previously raised questions about the legality of the OMT program.
On its Twitter account Wednesday, the ECB said that Villalon's opinion was an "important milestone".
"OMT is ready and available," tweeted the central bank.