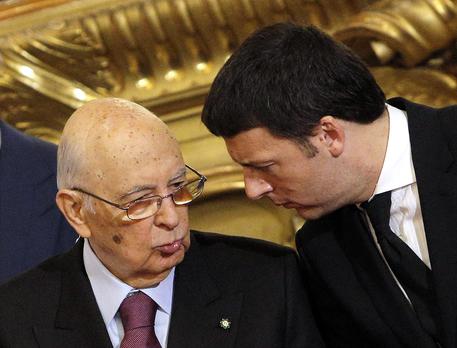 (ANSA) - Strasbourg, January 13 - Premier Matteo Renzi on Tuesday saluted President Giorgio Napolitano, who is expected to resign on Wednesday, in his speech in the European Parliament closing Italy's six-month duty presidency of the EU. Renzi paid tribute to Napolitano as a "convinced Europeanist, who will leave his post within hours" prompting warm applause from the MEPs in Strasbourg. Napolitano, 89, became the first former communist to be elected head of state in 2006. He made history again in 2013, when he reluctantly agreed to become to the first Italian president to be re-elected to avert a political crisis, after parliament failed to vote in a successor. Napolitano always said that he would not serve all of his second seven-year term, but vowed to guarantee stability in the country's top institutional positions until the end of Italy's duty presidency of the EU.
Renzi said that during his presidency, he had helped Italy face its difficulties "with intelligence and wisdom".