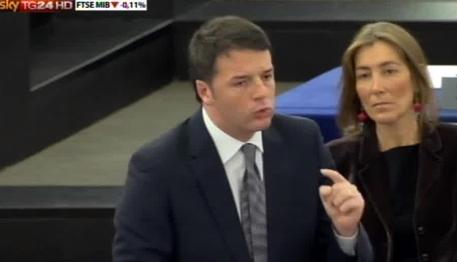 (ANSA) - Rome, January 13 - Premier Matteo Renzi said Tuesday that the European Union must change or risk becoming the world's economic tailender in a speech in the European Parliament in Strasbourg to close Italy's six-month duty presidency of the union. "I think that Europe (must) either change gear in the economy or we'll become the tailenders in a rapid-changing world," said the Italian premier, who said he was pleased the Italian presidency had made progress in getting greater flexibility in the application of EU budget rules.
But he added that more was needed. "In our opinion, we are going in the right direction, but we have to do more," Renzi said.
"We are ready to do our bit, to believe in investment...
in six months there has been a profound change of direction, not yet seen in the actions". European Commission President Jean-Claude Juncker on hailed Italy's duty president of the European Union as having "inspiring elements", adding that Rome had "done a good job". He said that Italy had been crucial in the approval of his 300-billion-euro investment plan and said the union would be in the midst of a "budget crisis" without Rome's work on a budget agreement for 2014 and 2015. "Many elements inspiring the actions of the Commission are due to the enthusiasm of the Italian presidency," he said. "Viva Italia".