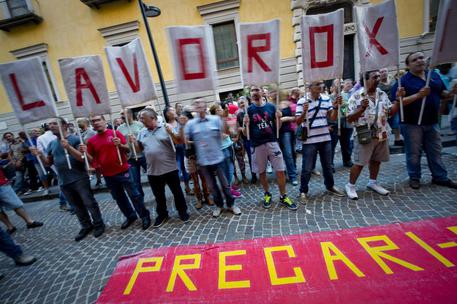 (ANSA) - Rome, January 7 - Recession-hit Italy's unemployment rate reached a record high of 13.4% in November, up 0.2 of a percentage point from October, Istat said in its preliminary estimate on Wednesday. It is the highest level since the statistics agency started giving monthly unemployment data in January 2004 and since it started giving quarterly figures in 1977.
The number of unemployed people in Italy reached 3.457 million in November, up 40,000 (1.2%) with respect to October and 264,000 (8.3%) compared to the same month in 2013, according to Istat's provisional data.
The national statistics agency added that the number of people working dropped by 48,000 (0.2%) in November with respect to October and by 42,000 compared to November 2013. Istat said unemployment continues to hit young people hardest.
The percentage of 15-to-24-year-olds who are unemployment reached 43.9% in November, up 0.6 of a percentage point on October for another record high. The percentage only captures young people who are in the job market and does not include those who are in education or not actively looking for work. Istat said 729,000 under-25s are looking for work in Italy.
Several opposition politicians said that the unemployment data shown Premier Matteo Renzi's government had failed.
But Renzi and Economy Minister Pier Carlo Padoan agreed at a meeting that the effects of new measures to create jobs in Italy "will be seen over time," ANSA sources said.
The government is introducing a mayor reform, the Jobs Act, to combat unemployment by overhauling the labour market. The aim is to replace a plethora of temporary and other low-paying, no-benefits contracts that have proliferated in Italy in recent years, meaning a regular full time job is increasingly hard to find.
But the reform has angered trade unions and rebels within Renzi's centre-left Democratic Party (PD), with the main bone of contention with the union being the weakening of Article 18 of the 1970 Workers Statute, which protects people from unfair dismissal, for newly hired workers.