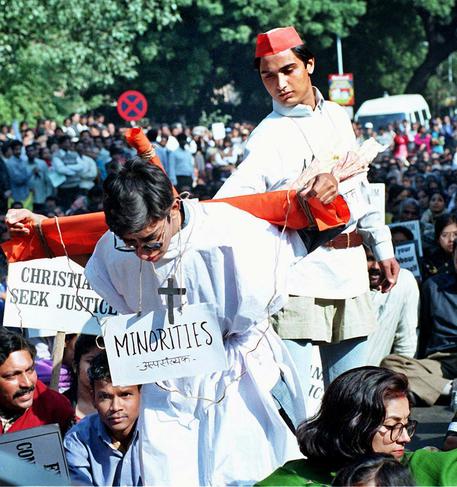 (ANSA) - New Delhi, January 5 - Indian Christians have urged the government to ban a programme of mass "reconversion" to Hinduism launched recently by a Hindu ultra-right organisation, the Times of India said Monday.
In a news conference held in Punjab Sunday, representatives of the Roman Catholic Church and two Protestant churches accused Prime Minister Narendra Modi of "extending tacit support" to the campaign by radicals from the Rashtriya Swayamsevak Sangh (Rss).
The campaign called in Hindi "ghar wapsi" (come back home), so far has led to the conversion of some 8,000 Indians who abandoned their faith and embraced Hinduism.
In December, dozens of Christians "returned to their Hinduist roots" in Kerala state, according to reports. Christian leaders said they will raise the matter with individual state leaders and threatened to demonstrate publicly.
The Christian minority, making up 2.3% of the population and traditionally present in India for 2,000 years, continues to feel under attack.
At times, that has been physical.
A fire in a Christmas creche in a church in the New Delhi area of Rohini on Saturday was caused by arsonists, ecclesiastical authorities said.