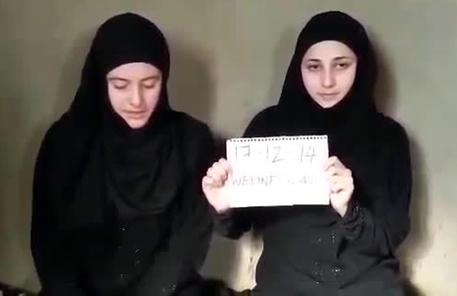 (ANSA) - Rome, January 2 - Families of two young Italian women held hostage by Islamist terrorists anxiously awaited word Friday after the two appeared in a dramatic video breaking five months of silence on their plight.
The video published on YouTube evidently proved that Greta Ramelli and Vanessa Marzullo were still alive, encouraging their families.
However, Italian secret service sources said the prolonged kidnapping that started when the two women were snatched in the Syrian city of Aleppo on July 31 was "a very delicate situation". The Syrian version of Al Qaeda, Al Nusra, claimed responsibility for the abduction.
Speaking English with eyes lowered, Ramella was recorded on the video saying: "We beg our government and its mediators to bring us back home by Christmas".
"We are in extreme danger and could be killed" she added. "The government and its mediators are responsible for our lives," she said as Marzullo, holding a placard with the date December 17, looked briefly at the camera without speaking.
The two young women were videotaped wearing long dark tunics that covered their bodies and hair, leaving only their faces visible.
They seemed thin and their features were drawn and haggard from their ordeal.
Nevertheless, relatives said they were encouraged by the video.
"They seem fairly well even if a difficult condition," said Salvatore Marzullo, father of Vanessa, underscoring that both families are in constant contact with the Italian Foreign Ministry and that they hope "to have good news soon".
The group holding the women, Fronte al Nusra, said in a statement it acted because "Italy supports the raids in Syria against us".
A third Italian hostage, Father Paolo Dall'Oglio, was kidnapped at the end of July 2013 and is believed to be held by Isis at Raqqa.
The video was the first public information on Greta and Vanessa since September 20 when the Lebanese newspaper Al Akhbar denied reports that they were being held by Isis.