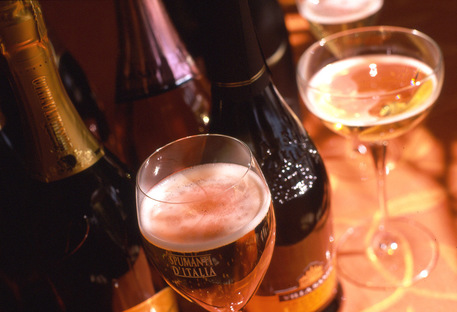 (ANSA) - Rome, December 30 - A rise in the sale of lentils and grapes, traditional symbols of good luck to be eaten on New Year's Eve, has been reported as Italians prepare to see in the New Year, farm group Coldiretti said Tuesday.
It released the results of a survey showing that two out of every three Italians intend to eat New Year's Eve dinner at home, planning to spend an average of 76 euros. Of the 64% of Italians celebrating at home, rather than in an restaurant, the numbers are evenly split between those staying at their own home, and those celebrating at the homes of friends or relatives. The survey, conducted by Ixe for Coldiretti, also found that of those Italians celebrating the end of the old year and welcoming 2015, about 9% intend to go to a restaurant and about 5% plan to visit a rural inn or agriturismo.
While sparkling wine and panettone are traditional New Year's fare, some 78% say they will also eat lentils for luck and almost three-quarters will also eat sausage.
Coldiretti said that consumption of local products, particularly those drawn from within one kilometer of the diner, has increased by 9% while 43% said they will favour products from close to home.
Some 50 million bottles of spumante will be consumed, favoured by 89% of those surveyed while only a little of 10% said they would prefer champagne.