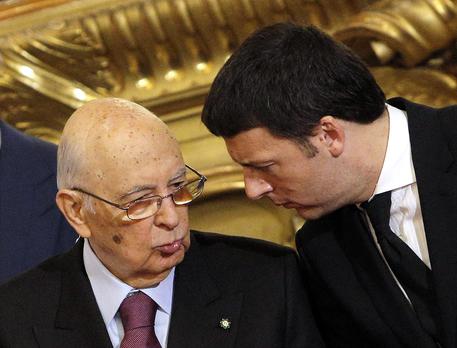 (ANSA) - Rome, December 22 - Premier Matteo Renzi on Monday called on his center-left Democratic Party (PD) to remain united in the year ahead, when MPs and regional delegates will likely be called on to elect a new president of the Republic.
The outcome of that election "depends in large part on us, because we have 460 votes," Renzi told MPs and top party officials during a Christmas toast at PD headquarters. "We must not repeat the errors of 2013," Renzi said.
Incumbent President Giorgio Napolitano said last Thursday that his resignation as head of State was imminent. He is tipped to announce he is stepping down in his traditional New Year's Eve address to the nation. The 89-year-old former Communist reluctantly agreed to become Italy's first head of State to be re-elected last year to avert a crisis after squabbling parties were unable to agree on a successor.
That crisis was sparked by rebellions within the PD, at the time led by Pier Luigi Bersani, that scuppered the two candidates the group presented.
In Italy, the president is elected by a joint session of the houses of parliament plus regional delegates, totalling just over 1,000 people. The president of the Republic is the head of State and has the power to dissolve parliament. He or she represents national unity, guarantees that Italian politics comply with the Constitution, and is elected for a term of seven years.