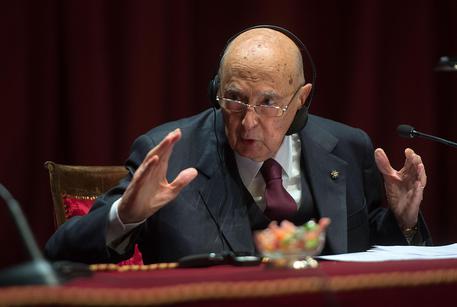 (ANSA) - Rome, December 22 - Italian President Giorgio Napolitano on Monday bemoaned a lack of cooperation from India over the case of two Italian marines accused of killing two Indian fishermen during an anti-piracy mission in 2012. "There has been scarce political will to provide a fair solution," the president said. "The malfunctioning of the Indian justices system (shows that this problem) is not just an Italian one". The case has strained relation between Italy and India for almost three years.
Tension flared up again last week when the Indian supreme court knocked back a request from one of the marines, Salvatore Girone, to return to Italy for the Christmas holidays and a petition from the other, Massimiliano Latorre, to extend his stay in Italy for health reasons.
Latorre is receiving treatment in his homeland after suffered a stroke-like attack earlier this year.
Napolitano said Monday that he will meet Premier Matteo Renzi on Tuesday to discuss the case. "I'm counting on having a meeting tomorrow morning with Renzi, who will give me the latest developments on the steps taken with respect to the Indian authorities," Napolitano told Girone while greeting Italian military personnel around the world before Christmas. Indian Foreign Minister Sushma Swaraj last week said New Delhi was "studying" an Italian proposal for a consensual solution to the dispute.
Italian Foreign Minister Paolo Gentiloni, however, expressed skepticism about the likelihood of this producing a breakthrough.
"The harvest (from the dialogue with India) has been very disappointing," Gentiloni told State broadcaster RAI.
"If the agreement is what we saw the other day, then we're not going very far.
"I hope that different roads can be found in the next few days".
Defense Minister Roberta Pinotti has said that Latorre, who was allowed to leave India in September for four months, is in no condition to travel.
Latorre and Girone are accused of killing fishermen Valentine (aka Gelastine) and Ajesh Binki after allegedly mistaking them for pirates and opening fire on their fishing trawler while guarding the privately owned Italian-flagged oil-tanker MT Enrica Lexie off the coast of Kerala on February 15, 2012.
Rome has protested the many delays in the case. Formal charges have not yet been presented Italy successfully fought to ensure New Delhi took the death penalty off the table and dropped the application of a severe anti-terrorism, anti-piracy law, which it said would have equated Italy with a terrorist state.
Rome argues the case is not in India's jurisdiction as the incident took place outside the country's territorial waters.
It also says the marines should be exempt from prosecution in India, because they are servicemen who were working on an anti-piracy mission, and allowed to return home.
Gentiloni said Wednesday that the government would "take a decision within days" on seeking international arbitration in the case.