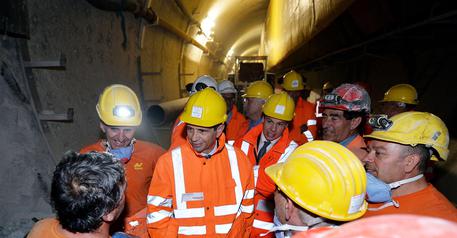 (ANSA) - Chiomonte, December 22 - Transport Minister Maurizio Lupi said Monday that he was worried about a new strategy adopted by hardcore protestors against the TAV Turin-Lyon high speed rail link. "I'm worried about the change of strategy" he said after a Molotov cocktail caused a fault that disrupted railway traffic on the Rome-Florence high-speed link at the weekend. He was speaking during a visit to a TAV work site at Chiomonte, near Turin. "Being as they can't stop the Chiomonte site, some are continuing with attacks that on the symbols of high speed rail," Lupi said.
Protests against the Turin-Lyon link have frequently turned violent in recent years.
Critics have said the high-speed Tav project will cost too much and wreak terrible environmental damage in the Alpine region of Piedmont.
But the Italian and French governments say it will reduce highway traffic and in the long run, be good for the environment.
Last week a Turin court sentenced four 'No-TAV' protestors to three years, six months each in prison after convicted them for a May 2013 attack on a TAV site.
But the court acquitted of the four of terrorist charges.
Lupi has said last week that he hoped prosecutors will appealed. "If putting on hoods and organising an attack on the State is not association for terrorist ends, someone must explain to me what it is," Lupi said.