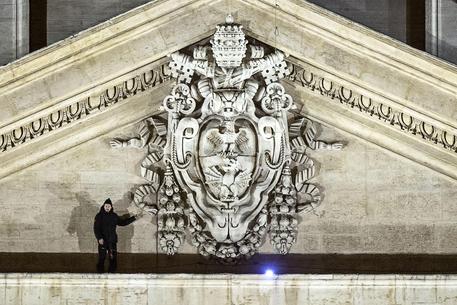 (ANSA) - Vatican City, December 22 - An entrepreneur with a head for heights was spending a second day Monday perched 240 feet (80 M) up the facade of St Peter's Basilica to protest an EU directive that he says will put him out of business.
Marcello Di Finizio, a native of Trieste, clambered on to a ledge on the facade Sunday and spent the night there in the fifth such protest he has staged on the largest church in the world against the Bolkestein Directive - an EU law aiming at establishing a single market for services.
During his previous protests Di Finizio, aged 47, climbed onto the dome of St Peter's but this time he perched on a ledge above the balcony where on Christmas Day Pope Francis will deliver his Urbe et Orbi address to the city and the world.
Di Finizio has asked for a meeting with Italian Premier Matteo Renzi to discuss his grievance.