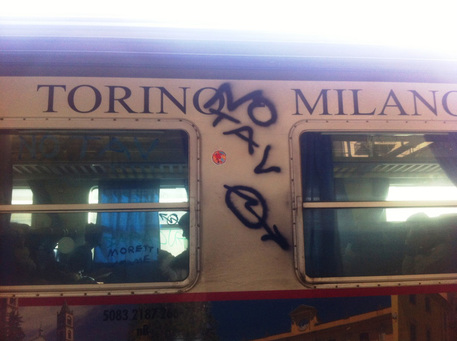 (See related) (ANSA) - Turin, December 17 - Hooded activists protesting a prison terms imposed Wednesday on four anti-TAV militants briefly blocked the motorway linking Turin to the French city of Frejus Wednesday and occupied a train travelling from Milan to Turin.
About 20 protesters blocked the motorway after a Turin court sentenced the four to three years and six months each in prison for an attack on a high-speed rail construction site in the Alps.
The protestors have all been fighting the construction of a high-speed TAV railway between Italy and France, claiming it will cost too much and destroy fragile environments.
The demonstrators lit smoke flares and unrolled a banner but dispersed after a few minutes and traffic returned to normal, police said.
In Novara, a major city in Italy's northern Piedmont region, a group of 30 activists seized control of a regional train and forced passengers to get out at station there to take another train.
The militants refused to leave the train sitting in the station.