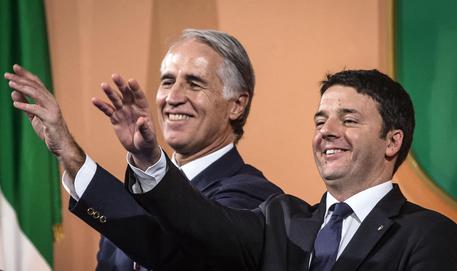 (ANSA) - Rome, December 16 - Premier Matteo Renzi on Tuesday expressed his "surprise" at negative reactions to his announcement that Italy will stage a bid to host the 2024 summer Olympics centred on Rome, saying fear of corruption should not be allowed to spoil the dream.
"The reaction is surprising," Renzi told the Lower House of parliament.
"Everyone is saying that it is impossible to stage the Olympics in Italy because there are people who steal," he continued. "But if those that steal are sent to prison it is possible to move forwards," the premier argued. On Monday, Northern League leader Matteo Salvini criticised Renzi for "living on another planet" in relation to the announced bid, which comes amid a big mafia probe in the capital and a graft scandal involving contracts for Milan Expo 2015.
And on Tuesday Salvini returned to the subject, calling on the state "first to resolve corruption, then to organise sporting events". However, the premier told parliament that the Olympics are "a dream that must be strong, tenacious, of high quality - but to say that they can't be hosted because some people are not up to scratch is to frustrate citizens' desires".
Italy's anti-corruption chief Raffaele Cantone on Tuesday expressed a similar view.
"It is one thing to pass up an opportunity because it is deemed impossible to make the necessary investment, another out of fear of corruption: this cannot be an alibi," Cantone said.
Rome's bid to host the 2020 Olympics was dropped in February 2012 by then-premier Mario Monti on grounds that Italy could not afford such an expensive venture due to its economic situation.