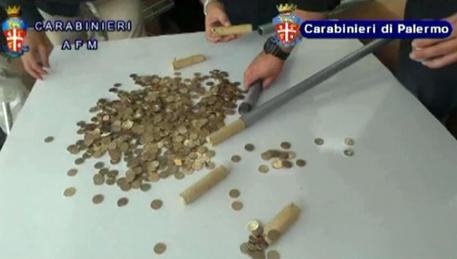 (ANSA) - Palermo, December 12 - Sicilian investigators who seized counterfeit euro coins with a face value of 600,000 euros urged Chinese counterparts Friday to help close down a criminal 'mint' producing the coins in Shanghai.
"The good quality of the coins allows the fake euros to be accepted by machines," Palermo deputy prosecutor Dino Petralia told a press conference.
"This was a well-conceived fraud, given that nobody checks the validity of coins".
The flow of fake two-euro coins was "one of the biggest carried out in Europe," said Giuseppe De Riggi, commanding officer of the Carabinieri for the province of Palermo.
Francesco Ferace, head of the Carabinieri's anti-counterfeit department, said "now it is up to the Chinese government to lend us a hand".
"The operation should continue in China to block the clandestine 'mint' discovered in Shanghai," he added.
The racket came to light when police probing the murder of a Sicilian businessman involved in a juvenile prostitution racket discovered that the youngsters were being paid with fake euro coins, police sources said.