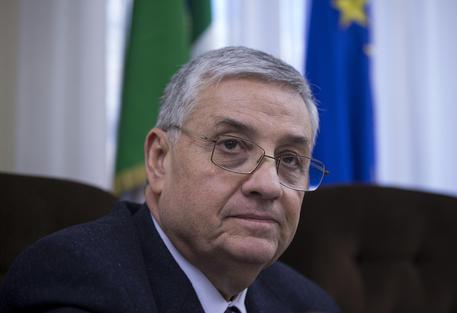 (ANSA) - Rome, December 11 - Rome Chief Prosector Giuseppe Pignatone told the parliamentary anti-mafia commission Thursday that more operations are in the works in his Rome mob probe, which has led to dozens of arrests.
"More operations will follow shortly," he told MPs, adding that the city has frozen a 25-million-euro public housing tender offer "because it may have gone to firms owned by (jailed suspect Salvatore) Buzzi". A former manslaughter convict, Buzzi headed several cooperatives implicated in the probe.
The syndicate does not have a rigid structure, Pignatone said. Ex rightwing terrorist and gangster Massimo Carminati is the leader, Riccardo Brugia was in charge of what he called the "military" aspects and Salvatore Buzzi managed the civil service contacts, Pignatone explained. The organization used mafia methods including "violence to reach licit and illicit goals, and intimidation of its interlocutors," the prosecutor said. The Rome mob cut across party lines, he added. For example, "Carminati comes from the extreme right, Buzzi from the opposite extreme. Asked how he can bear to associate with the likes of Carminati, Buzzi replied 'politics is one thing, business is another'," Pignatone said. The prosector went on to say that the mob is not Rome's only problem. "It may not even be the main problem," Pignatone said. "Rome is not being controlled by one single mafia organization... it's too big for that". However, the mob he has uncovered in his two-year investigation "is original and native" to the city. "In Rome a series of mafia investments have been made, and there are also mafia-type organizations in the surrounding territory," Pignatone said. "But today we took a step forward. There is no connection to the classic mafia... (the Rome mob) mirrors Roman society in some way". Pignatone's hearing came after Carabinieri earlier on Thursday arrested two more people as part of his massive probe. Rocco Rotolo and Salvatore Ruggiero were nabbed on charges of mafia association and are suspected of linking cooperatives controlled by Roman mobsters with the Calabria-based 'Ndrangheta syndicate. Ruggiero, whom investigators say has ties with the Mancuso clan of the Calabrian mob, has been employed since 2009 in a company called Roma Multiservizi SpA, which is partially owned by the city of Rome. Its president since 2013 was Franco Panzironi, who has been arrested on charges of mafia association, corruption and bid-rigging. Panzironi is thought to be the right-hand man of Massimo Carminati, the alleged leader of the Rome mob who is now also behind bars. As well, investigators said Panzironi was an employee in 1998-1999 of the June 29 Cooperative led by fellow jailed suspect Salvatore Buzzi, a former manslaughter convict who was wiretapped apparently boasting about his ill-gotten gains. "Do you have any idea how much I make on these immigrants?" Buzzi allegedly said in a wiretap from early 2013 contained in prosecution documents. "Drug trafficking is not as profitable".