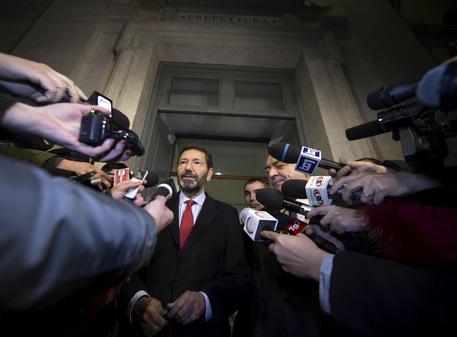 (ANSA) - Rome, December 10 - Rome Mayor Ignazio Marino met Wednesday with prosecutor Giuseppe Pignatone and delivered a set of documents which sources said may be useful in the ongoing police probe into mafia activities allegedly reaching to high levels in Rome.
Over 100 people have been placed under investigation in the probe, including former Rome center-right mayor Gianni Alemanno.
The mafia organisation, allegedly run by ex-right-wing terrorist and gangster Massimo Carminati, allegedly managed to rig City of Rome contracts worth millions.
Marino, a member of the centre-left Democratic Party (PD) of Premier Matteo Renzi, has not been implicated.
On Tuesday, Renzi vowed that the culprits will be punished to the fullest extent.
Renzi also announced that his government will raise the minimum jail term for corruption to six years, and that the statute of limitations for graft felonies will be lengthened.
"The corrupt will pay for everything," Renzi said via his Twitter account, @matteorenzi, as the Italian political world continued to feel the aftershocks of the probe prosecutors revealed last week. He added the changes will be proposed formally on Thursday.