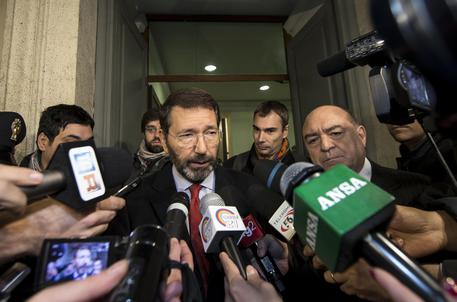 (ANSA) - Rome, December 10 - Center-left Mayor Ignazio Marino said Wednesday that the criminal mindset behind the racketeering mob uncovered in an ongoing probe in the nation's capital hails from the right wing of the political spectrum.
Over 100 people have been placed under investigation in the mafia probe including former center-right mayor Gianni Alemanno. Alemanno is currently in the rightwing Brothers of Italy (FdI) party, a splinter from the conservative People of Freedom (PdL) party of former premier Silvio Berlusconi. The Rome crime syndicate was allegedly run by former rightwing terrorist and gangster Massimo Carminati, and allegedly rigged Rome city contracts worth many millions of euros in sectors ranging from waste disposal to the management of migrant reception centres and Roma camps.
Many of the people incriminated in the probe are linked to Alemanno.
Several figures from the Democratic Party (PD) of Premier Matteo Renzi feature too, although Marino, who is also in the PD, is unscathed so far.
"Some in our party may have erred, but the criminal structure was born within Alemanno's right wing," the mayor told a Democratic Party (PD) gathering.
PD President Matteo Orfini, who has been put in charge of the party in Rome following the probe, said the local branch has been held hostage to internal "power wars" for years.
He said that his stint as commissioner of the Rome PD will not be short, as it will be necessary to "rebuild" the party in the city.
"The PD must go back to the streets, it must return to the people without fear," Orfini said Wednesday.
"The Rome PD has been marked by an endless war between bands that organized not for the sake of politics but for that of power," Orfini went on. "Such a party took hostage thousands of militants, card-carrying members and voters, who worked with passion and commitment on a daily basis to build a party worthy of this name".