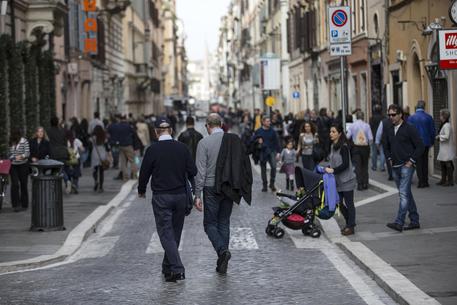 (ANSA) - Rome, December 5 - Italian families have confronted the financial crisis with a new "zero consumption" lifestyle, Censis said Friday in a new report. The Italian socio-economic research firm found that for the second year in a row, overall household consumption in 2013 was below levels in the early 2000s.
Censis' 48th report on the Italian social situation said that 62% of respondents reduce meals outside home; 58% save by cutting spending on movies and leisure; 44% reduce transport in cars and motorcycles to avoid spending too much in gasoline; and another 44% have modified eating habits to reduce spending. Thinking about the future, 29% of Italians surveyed said that they feel anxious due to the lack of a safety net; 29% are worried by a fragile margin of financial safety; 24% say they do not have clear idea of the future because everything is very uncertain; and only slightly more than 17% say they feel safe enough and have "their backs covered".
Italians also showed little faith in the ability to improve their own condition compared to other countries. Just 51% of respondents believed good education was important for achieving success in life.
An even smaller percentage - 43% - thought hard work was key. A total of 29% indicated that having the right contacts was important, compared to 19% in a similar survey conducted in the United Kingdom.
Twenty percent of Italians thought it was critical to come from a wealthy family to succeed compared to just 5% in France.