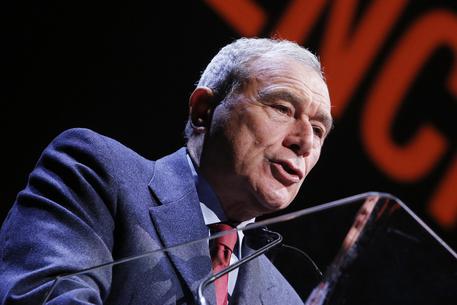 (ANSA) - Rome, December 5 - Senate Speaker Piero Grasso said Friday that Rome's city government should not be dissolved amid an investigation into mafia infiltration.
"It takes more to dissolve a municipality," the former anti-mafia prosecutor said responding to calls from some politicians to break up the current administration.
Mayor Ignazio Marino and his colleagues are "apart" from the investigation that is focussing on earlier administrations, said Grasso.
But Northern League leader Matteo Salvini said his party "is working" on finding a Rome candidate which the party will propose as an alternate mayor.
One day earlier, Rome Prefect Giuseppe Pecoraro said that his office was considering a petition from the anti-establishment 5-Star Movement for the Rome city council to be dissolved for mafia infiltration. Pecoraro also said that security measures for Marino were being beefed up, as the shock waves continued after prosecutors announced this week that they were conducting a huge probe into alleged links between local Roman politicians and a mafia organisation. More than 100 people are under investigation, including the man who Marino replaced as mayor in 2013, Gianni Alemanno, a right-wing politician and former agriculture minister under ex-premier Silvio Berlusconi.
As well, some 37 people were arrested on Tuesday. Several of those being investigated were expected to appear before an investigating magistrate on Saturday. Marino has so far emerged from the probe as being an incorruptible figure, but some members of his and Premier Matteo Renzi's centre-left Democratic Party (PD) have been implicated in the scandal.
Meawhile, PD national President Matteo Orfini, who has been put in charge of the Rome branch to party after this week's probe, said he did not think dissolution would be necessary. "I don't believe there is the risk of the City of Rome being placed under a commissar," said Orfini. "This (Marino's) administration has been a dam against the criminal powers and what emerges shows how there was an attack on this administration".
Still, Foreign Affairs Minister Paolo Gentiloni said the party must be sure to do a thorough "cleaning at home," within the party. Italy's anti-corruption czar Raffaele Cantone on Thursday denied reports that he was setting up a special team to look at corruption linked to the so-called Mafia Capitale. But Cantone said that his authority would order any contracts that are tainted by organised crime to be removed from the firms or cooperatives that have them. "We told Marino that we will run checks on the contracts and we will put those won thanks to corruption in the hands of commissioners," Cantone said after meeting the mayor. "There won't be a special team or any special activities".
Lazio Governor Nicola Zingaretti said the regional government has suspended the awarding of all contracts while it conducts an internal investigation to find possible mafia infiltration there. Among those put behind bars Tuesday was the Roman mobsters' alleged leader Massimo Carminati, a former member of the NAR neofascist terrorist group and of the Banda della Magliana crime gang. The organisation alleged made millions by rigging contracts in fields including waste management, park maintenance, migrant and refugee reception centers (CIEs) and Roma camps. Salvatore Buzzi, a former manslaughter convict who headed cooperatives implicated in the scandal, seemed to boast about how much profit his gang was making off scamming city settlement centres. "Do you have any idea how much I make on these immigrants?" Buzzi allegedly says in a wiretap from early 2013 contained in prosecution documents. "Drug trafficking is not as profitable. We closed this year with turnover of 40 million but...our profits all came from the gypsies (Roma people), the housing emergency and the immigrants".
Interior Minister Angelino Alfano said Thursday that the probe does not mean that the whole city is tainted. "My assessment is that Rome isn't a rotten city," Alfano told Mediaset television. "Rome isn't a dirty city, it's a healthy city. If someone stole, they should be punished, without criminalising a whole community and a whole city, which is healthy and strong".