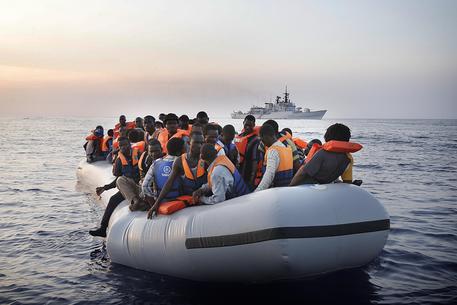 (ANSA) - Rome, December 5 - Some 18 migrants who tried to sail from Libya to Italy on an inflatable raft likely died of dehydration and hypothermia, authorities said Friday.
The bodies and the craft were found about 100 miles south of the island of Lampedusa, Italy's southernmost point and frequent destination of migrants fleeing Africa for Europe.
Another 76 migrants were rescued, authorities said.
One migrant who was rescued died soon after, raising the death toll from the initial count of 17.
Italian Coast Guard and Navy ships as well as private vessels answered distress calls, found the dinghy and rescued others on board.
It was one of the first rescues since an European Union-led initiative Triton took over from Italy's Mare Nostrum migrant rescue program a month ago.
Previously, two other operations were carried out by Navy vessels - patrol vessel Cigala Fulgosi and corvette Driade - rescuing respectively 102 and 100 migrants aboard boats south of Lampedusa.