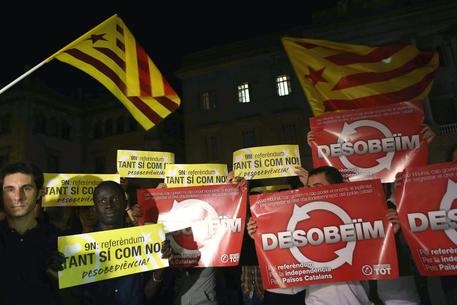 (by Elisa Pinna) (ANSA) - ROME, DECEMBER 4 - The Catalan government will in the coming months open a delegation in Rome to raise awareness in the country about the region's bid for independence from Spain. The announcement was made on Thursday during a conference at the Rome Tre university by Francesc Homs, advisor to the Catalan presidency and spokesman for the Barcelona government. The Catalan government already has representative offices in Brussels at the EU, Germany, France, Great Britain and US. Citing the November 9 ''consultation'' won by those calling for independence, Homs reiterated the desire to move forward. ''As Catalan politicians,'' he said, ''we are trying to meet a massive, peaceful demand for self-determination.'' Spain, however, refuses to so much as discuss the matter.
''As a result of the consultation,'' the regional government representative noted, ''Spanish prosecutors have opened criminal proceedings against the Catalan government for daring to ask the opinion of its people.'' If in future elections the Catalan population reiterates its will to separate from Spain, ''confrontation with Madrid will be necessary'', he added, noting that other nations - such as Great Britain, as concerns the Scottish independence vote - had behaved differently in similar situations.
On this issue, he said, ''Denmark is a true model.
Copenhagen has never used its constitution to prevent independence movements in Greenland and the Faroe islands.'' With almost eight million inhabitants - including a million who have immigrated there in recent times - Catalonia accounts for 15% of Spain's population, 20% of GDP and 26% of foreign trade. Though not the wealthiest region (coming in fourth after the Basque Country, Navarre and the Madrid province), it is forced to transfer about 8% of its GDP to the Spanish capital.
Taxes collected by Barcelona total over 19% of Spain's revenue but only 14% of expenditure is allotted to Catalonia from the central government, a percentage under even the share of the national population its inhabitants account for. Catalans say that the problem is not only one of the amount of money transferred to the Spanish capital. There is also the desire in the region to decide their own future, since - as Catalan finance minister Andreu Mas-Colell put it recently - ''Madrid's centralized government model does not function any longer in the global market'' and it is ''a weight that is sinking the Spanish economy, as well as ours''. The Catalan government spokesman on Thursday noted in the Italian capital that Catalonian independence ''was born 650 years ago and not with the 1978 Spanish decentralization''. A future separation from Madrid, he said, however, will not mean distancing itself from the EU. ''We all know,'' Homs said, ''that the EU is going through difficult times. But we can assure you that we are clearly pro-EU.''(ANSAmed).