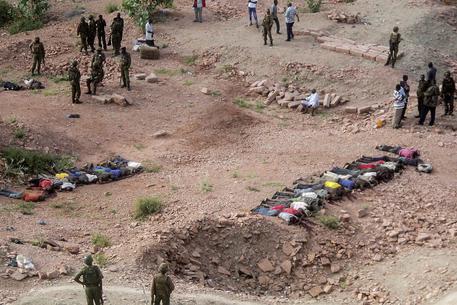 (ANSA) - Nairobi, December 2 - Islamist extremists from the Somalia-based al-Shabaab (the Youth) militia have slaughtered 36 quarry workers in northeastern Kenya, the Red Cross said Tuesday.
The massacre by what was reportedly a commando of 11 men took place on the night between Monday and Tuesday, 15 kms from the city of Mandera located near the border with Somalia.
The victims, all non-Muslim workers at a nearby quarry, were attacked in their sleep, some of them horribly decapitated.
Al-Shabaab claimed responsibility for the attack and promised new ones would be carried out. Kenyan President Uhuru Kenyatta on Tuesday sacked the national police chief and the interior minister and announced he will wage war on the Somali militia, the BBC reported.