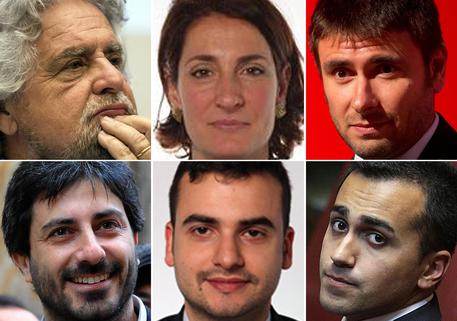 (ANSA) - Rome, November 28 - The anti-establishment 5-Star Movement (M5S) on Friday approved a five-member directorate to flank leader Beppe Grillo, who said earlier on his blog that he was "a little tired" and needed help running the movement.
On his blog, Grillo asked M5S supporters to vote to ratify the nominations of Alessandro Di Battista, Luigi Di Maio, Roberto Fico, Carla Ruocco and Carlo Sibilia, to be part of the directorate.
A total of 37,127 supporters took part in the online vote on Grillo's blog - which gave rise to the movement in 2009 - with 91.7% in favor and 8.3% against.
"Thank you! We are ready to build the future of M5S!" Grillo tweeted. The notoriously foul-mouthed comedian-turned-politician earlier admitted that he was "a little tired" and needed a team to back him up.
"The M5S needs a bigger structure," Grillo wrote. "Me, my camper and the blog are not enough any more". The Internet-based M5S rocked the political establishment by capturing a quarter of the vote at last year's general election. But Grillo's bossy, firebrand style and his uncompromising stance on many issues, including his refusal to strike deals with established parties and his ban on M5S lawmakers giving TV interviews, has come under fire recently. These stances have been blamed for the M5S's disappointing showing in May's European elections and in regional elections this month in Calabria and Emilia-Romagna. The movement is also in torment over Thursday's expulsion of two MPs, Massimo Artini and Paola Pinna, for allegedly violating party rules by failing to return a share of their parliamentary salaries.