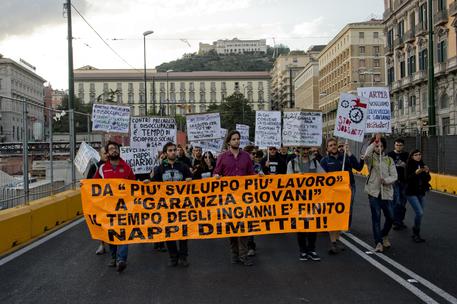 (ANSA) - Rome, November 28 - Unemployment in recession-battered Italy reached a record high of 13.2% in October, up 0.3 percentage points on September and 1% on the same time in 2013, according to the preliminary estimates Istat released Friday. This is the highest level since the national statistics agency started publishing monthly unemployment data in January 2004 and quarterly jobless figures in 1977, it said. The figure was all the more eye-catching because Italy has changed the way it calculates unemployment data, which also led to an upward revision of past figures.
So the unemployment figure for September, for example, was revised up from 2.6% to 2.9%. Istat said Friday that 3.41 million Italians were unemployed in October, 90,000 more (2.7%) than in September, and 286,000 more (9.2%) than in the same month in 2013. The agency added that the number of people in work in October was 55,000 down (0.2%) on September. The rest of the increase in the jobless figure was accounted for by an increase in the overall working population, due to a decline in the number of people considered "inactive" because they are not actively looking for work.
Premier Matteo Renzi said Friday that the latest unemployment data was a "worry" but he also argued that jobs have been created since he took office in February. Speaking in Catania, Renzi said more people are now working in Italy, although "much remains to be done" in creating employment. The premier also urged a positive attitude. "We must not deny the problems, but no one should see the glass as half empty," said Renzi, whose controversial Jobs Act labour reform aims to combat unemployment. Istat's data reaffirmed that unemployment is hitting young Italians particularly hard.
It said unemployment among 15-to-24-year-olds who are on the job market stood at 43.3% in October, an increase of 1.9% over the same month in 2013. More than 708,000 young Italians are in the job hunt, the agency said.