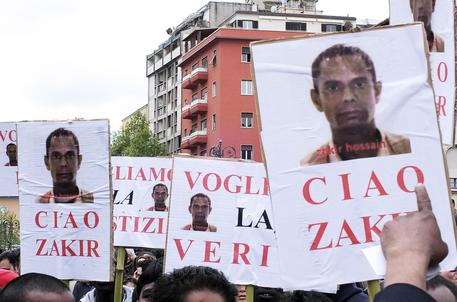 (ANSA) - Pisa, November 26 - The Tuscan city of Pisa will confer a lifetime pension of 2,000 euros a month to the widow and three children of a Bangladeshi waiter who was beaten to death on his way home from work in April this year, sources said Wednesday.
Zakir Hossain, 34, was violently punched for no apparent reason by a 26-year-old Tunisian national after leaving the Indian restaurant where he worked as a waiter around 1 a.m. on the night between April 13 and 14. Police released CCTV footage of the fatal attack, in which Hossain was hassled by a group of four men and then assaulted by one of them.
The four suspects fled the scene aboard a car, and later attempted to attack two more people in two different central Pisa locations, police said.
They have since been identified as Tunisian national Hamrouni Hamza, 27, who threw the fatal punch and stands accused of voluntary manslaughter.
He flew out of Milan's Malpensa airport two days after the attack, and remains a fugitive in his native Tunisia.
Italian national Simone Tabbita, 22, and a 16-year-old Tunisian who is a relative of Hamza were charged with aiding and abetting the elder Hamza.
Another 20-year-old who was part of the group was not charged because he did not participate in the assault and did not intervene to free Hamza when witnesses tried to stop the attack on Hossain.
Hamza's punch sent Hossain into a 36-hour coma from which he never recovered, and after his death shops lowered their shutters or turned off their lights in signs of mourning as some 1,000 people marched through downtown Pisa in memory of Hossain.
The march was led by Pisa Mayor Marco Filippeschi, Bangladeshi Ambassador Shahdat Hossain, and the mayor of the town of Cascina, where the four attackers lived.
Meanwhile, the Pisa section of the National Workmen's Comp Institute (INAIL) has classified Hossain's death as a work-related injury because it happened on his way home from work, awarding his widow and children the lifetime pension.