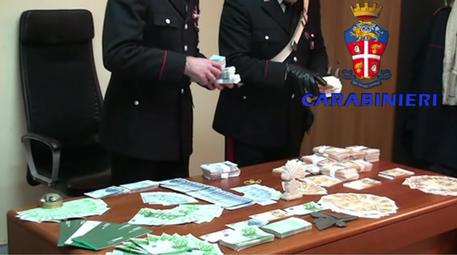 (ANSA) - Rome, November 26 - A criminal gang busted in Naples was said Wednesday to be part of a larger ring responsible for 90% of the world's counterfeit euros. The gang, part of the so-called "Napoli Group", is known to police throughout Europe, prosecutor Giovanni Colangelo said at a news conference to explain the investigation that led to some 56 arrests.
Charges include conspiracy, forgery of money, spending and introduction of counterfeit money.
Described as the arch-enemy of the European Central Bank, the Napoli Group includes some 11 criminal gangs, each specializing in a part of a counterfeit operation that even circulated in Germany a fake 300-euro banknote - a denomination that doesn't exist.
Police believe the gangs, based in Italy, had organized crime connections across Europe to help with distribution that spread the counterfeit euros as far as Africa.
The gang apparently used nicknames for the fake currency, including using the Italian terms for shoes, postcards and dumplings for euro coins. They also produced the occasional fake lottery tickets, known as "scratches", and false stamps.
Albania, Algeria, Bulgaria, France, Germany, Morocco, Romania, Senegal, Spain and Tunisia were the countries most affected by the counterfeiting, police said.
Over two years of investigating, police said they seized 5,500 counterfeit banknotes and coins worth a total of about one million euros.
Investigators said the Napoli Group had achieved "complete control of the international market through the distribution of significant amounts of fake money in Italy and all over the world".
In a twist in the case, police said that Domenica Guardato, the mother of a six-year-old child who died on June 24 after a suspicious fall from a sixth-floor balcony, was implicated in the counterfeit operation. An autopsy showed the child, Fortuna, was sexually abused before she died from the fall in Caivano, a city about 14 kilometres north of Naples.
The child's death has been under investigation as a possible murder and Guardato has vowed to get justice for her daughter who had been abused in the months before her death, the autopsy showed.
Other Caivano residents were arrested Wednesday on suspicion they distributed the counterfeit currency through spending in supermarkets and stores in the city.
Police said their investigation, which began two years ago, uncovered a printing operation in the Naples suburb of Arzano and a mint to produce counterfeit euro coins near Rome in Gallicano.
Meanwhile, prosecutors said they had not found a link between the Napoli Group and the powerful Camorra mafia clan that is based in the area.
Still, Italy's Anti-Mafia Directorate (DIA) was involved in the probe because it is responsible for dealing with crimes of conspiracy to produce and sell counterfeit currency.