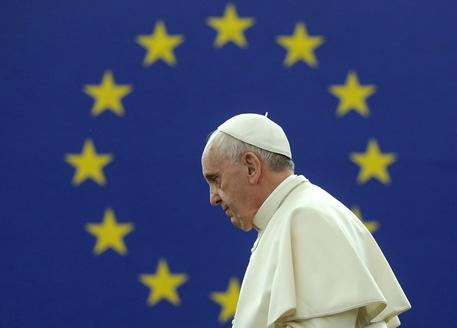 (ANSA) - Strasbourg, November 25 - Pope Francis told the European Parliament on Tuesday that the European Union's ideals have become overshadowed by the bloc's bureaucratic tendencies.
"The great ideas that once inspired Europe seem to have lost their attraction, only to be replaced by the bureaucratic technicalities of its institutions," the pope said in his first speech to the EP. Suggesting that to some, Europe appeared to be a bit "elderly and haggard," Francis also urged MEPs to apply greater flexibility in promoting policies that will create jobs while ensuring a balance between worker security and "market flexibility". "Above all, there is a need to restore dignity to labour by ensuring proper working conditions," Francis said in the first of two speeches to European leaders during his one-day visit to Strasbourg. "This implies finding new ways of joining market flexibility with the need for worker stability and security, which are indispensable for their human development".
The pope's words seemed to endorse many of the controversial policies being promoted by Italian Premier Matteo Renzi, whose proposed labour legislation reform has triggered widespread protests by Italian trade unions.
Renzi, who was also in Strasbourg to hear the pope speak, later enthused that the two leaders were on the same wavelength.
Renzi said he "deeply shared" the call from pope for greater flexibility in labour market.
"I totally agreed with the pope saying...flexibility and stability are necessary in the workforce," said Renzi. "That is exactly the sense of what we are doing in Italy". Europe is struggling with high levels of unemployment, especially among young people.
In Italy, unemployment among youth is more than 40%.
The European Parliament broke into applause during a speech by Francis, who said that employment is essential if a person is to maintain dignity.
"What dignity can a person ever hope to find when he or she lacks food and the bare essentials for survival and, worse yet, when they lack the work which confers dignity?" said the pope.
Francis also called for better treatment and a recognition of the dignity of migrants to Europe, calling for a "united response" among Europeans on migration.
"We cannot allow the Mediterranean to become a vast cemetery," the pope said.
"The boats landing daily on the shores of Europe are filled with men and women who need acceptance and assistance".
Meanwhile, in a subtle dig at right-wing political forces opposed to migration into Europe from other countries and other religious backgrounds, Francis said that Europe's roots in diverse faiths are an antidote to extremism. "A Europe that is capable of appreciating its religious roots and of grasping their fruitfulness and potential will be all the more immune to the many forms of extremism spreading in the world today, not least as a result of the great vacuum of ideals that we are witnessing in the West," he said. He also deplored persecution against religious minorities around the world who he said are "subjected to barbaric acts of violence".
Christians in particular are facing deadly attacks, the pope added. "Communities and individuals today find themselves subjected to barbaric acts of violence: they are evicted from their homes and native lands, sold as slaves, killed, beheaded, crucified or burned alive, under the shameful and complicit silence of so many".
Despite the serious tone of his speeches, the pope joked with reporters on his early morning flight to the French city from the Vatican, saying he hoped they would not be exhausted by his itinerary.
"A short time, and so much to do!" he said, adding that he would take time to speak with them on the return flight to Italy.
"I am at your disposal, as usual".
Europe is sick with loneliness and individual isolation, said Francis. "One of the most common diseases in Europe today is loneliness typical of those who have no connection with others," the pope said. http://popefrancisnewsapp.com/