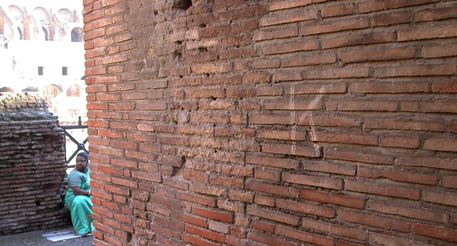 (ANSA) - Rome, November 21 - A Russian tourist who picked up a rock and carved a huge letter K on the wall of the Colosseum was arrested Friday, police said.
The man, 42, was charged with causing aggravated damage to one of Italy's most iconic symbols.
Earlier in the day, a guard at the internationally famous site saw a visitor in the act of carving on an interior wall that is being restored on the ground floor of the Flavian amphitheatre.
He called police.
"The damage to the monument is notable," said historic site Superintendent Mariarosaria Barbera.
"The incision cut out part of the surface of the structure and compromises its conservation and image".
The Russian is the fifth tourist caught while allegedly carving graffiti on the walls for the Colosseum after earlier incidents involving two Australians, a Canadian and a Brazilian.