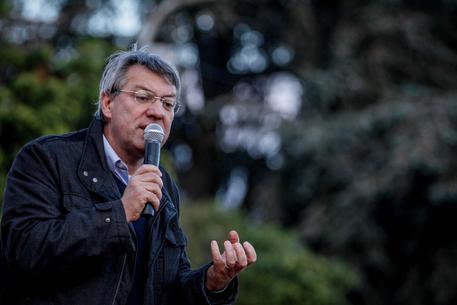 (ANSA) - Naples, November 21 - Premier Matteo Renzi is not backed by honest Italians, Maurizio Landini, the leader of the FIOM metalworkers union, said on Friday. "Renzi recognises that he doesn't have the support of honest people, of workers and of those who are looking for work," Landini, who has been leading protests against the government's Jobs Act labour reform, said at a rally in Naples. The FIOM is part of Italy's biggest trade-union confederation, the CGIL, which has called a general strike to protest the Jobs Act and the government's 2015 budget law on December 12 along with another big union, the UIL. "You save jobs by keeping factories open, not by feeding controversy, and by solving the industrial crisis, not by playing 'who can shout loudest'," Renzi replied.
Landini's comments immediately also drew an indignant reaction from several others.
"Personally, I consider myself very honest," said Giorgio Squinzi, the head of industrial employers confederation Confindustria. "We believe that this country needs a new climate of industrial relations".
Matteo Orfini, the president of Renzi's centre-left Democratic Party (PD), said Landini had offended millions. "By saying that the government doesn't have the support of honest people, he offended millions of workers who believe in the PD," Orfini said via Twitter. "I'm sorry that it came from a trade unionist".
Landini tried to backpedal later on Friday, saying his comments had been misinterpreted. "I never thought that Renzi doesn't have the support of honest people, as I have been attributed as saying by some media organs," Landini said. "I said, and I reiterate, that the premier does not have the support of the majority of people who work and the people who are looking for work and they are on the honest, tax-paying side of the country". Before the row broke out, Landini warned Renzi that he could not revamp Italy all on his own. "Renzi cannot make decisions from morning until night. He cannot change the country on his own," Landini told the Naples rally accompanying a one-day strike his union has called in parts of Italy. "On his own he just responds to the powers that be".