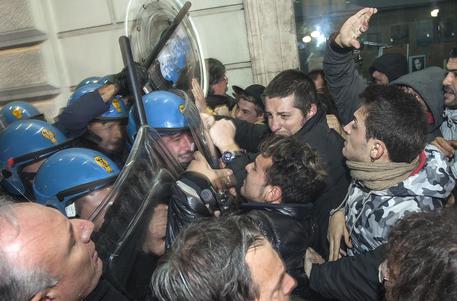 (ANSA) - Cosenza, November 21 - Some 100 protesters wearing masks made out of photos of Italy's premier with a Pinocchio nose and calling for "income, housing and jobs" on Friday threw bottles and flares at police near an auditorium where center-left Premier Matteo Renzi is set to speak at the closure of a campaign for regional elections in the southern Calabria region.
One of the demonstrators was taken to hospital with a head injury and three police officers suffered contusions when some of the protesters - made up of extreme leftists, housing activists, laid-off workers, and temp workers - tried to break through a checkpoint. Police stopped them with a brief charge, sources said.
The Calabria race sees five candidates pitted for the governorship of the troubled southern region, including Mario Oliverio from the premier's Democratic Party (PD), Wanda Ferro from the center-right Forza Italia party of ex-premier Silvio Berlusconi, and Cono Cantelmi from the anti-establishment 5-Star Movement.