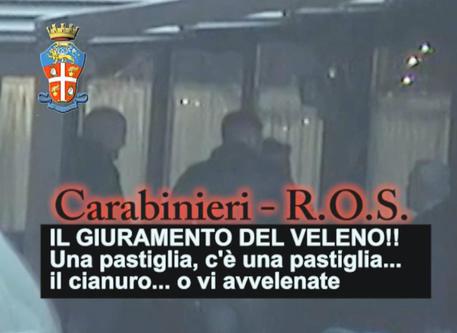 (ANSA) - Rome, November 18 - Anti-mafia police released unprecedented footage of a swearing-in ceremony of the Calabrian-based 'Ndrangheta mafia, shot undercover as part of an investigation that led to the arrest of 40 suspected mafiosi on Tuesday. "It's the first time that the swearing-in, with the awarding of roles and tasks, has been documented live," said Milan Prosecutor Ilda Boccassini.
Previously, details of the ceremony that bestows on mobsters membership in the so-called "santa" (holy) level - the highest in the 'Ndrangheta - had only ever been recounted second-hand by former mobsters providing evidence to the State.
The film released by police, shot using a hidden camera, is poor quality but shows several men sitting on chairs pulled in a circle.
"In this holy night, in the silence of the night and under the starlight and the shining moon, I create the holy chain.
With humble words, I create the holy society," says a dark-haired mafia leader wearing a baseball cap.
The others are warned to use a cyanide capsule and commit suicide rather than ever betraying their mob clan.
Police later said one of the initiates, who were all ordered to swear loyalty for the next seven generations of their families, was only 17 years old.
The secret film came as part of a two-year probe of the crime syndicate that also led to numerous arrests.
Three of the 'Ndrangheta suspects were put under house arrest while the rest were taken to jail.
Those arrested in a police sweep across the northern regions of Lombardy and Veneto and on the southern island region of Sicily were charged with mafia association, extortion, and illegal weapons possession.
Investigators claimed the suspects belonged to three clans operating in the Lombardy provinces of Como and Lecco where they had infiltrated the local community.
The film of the affiliation ceremony was made during a convivial gathering of members of the three clans known as a 'mangiata' (feast) and includes references to Giuseppe Mazzini, Giuseppe Garibaldi and Alfonso La Marmora - three leading figures of the 19th century Risorgimento movement for Italian unification. Investigators said that Garibaldi represented the local clan leader, Mazzini the treasurer and La Marmora another high-ranking member. Meanwhile, Interior Minister Angelino Alfano said Tuesday that the State must use "all the force at its disposal" to protect magistrates from the mafia, particularly in Palermo.
He spoke after a meeting of the national committee for public order and security to discuss the authorities' response to threats to Sicilian magistrates from organized crime.
"We will use all the force the State has at its disposal, in terms of men and equipment," said Alfano.
The meeting was called after former mafia boss Vito Galatolo revealed plans to assassinate prosecutors including Palermo's Nino Di Matteo, who has also been threatened from jail by former Cosa Nostra Mafia "boss of bosses" Toto' Riina. Galatolo said mafia figures also had a cache of explosives for the planned attacks, triggering a police hunt for the weapons.