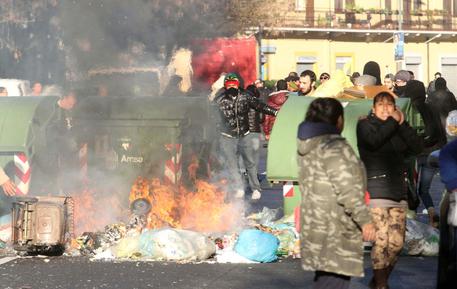 (By Laura Clarke) (ANSA) - Milan, November 18 - Police clashed with protestors in Milan on Tuesday during the eviction of two left-wing social centres from public housing premises that had been illegally occupied in the south of the city. Police charged the activists and fired teargas after coming under a barrage of stones. The social centre activists also set fire to rubbish bins.
A city campaign to evict families and social centres that have been illegally occupying Milan council-owned houses has caused considerable tension in recent weeks. On Monday, scuffles broke out after a family was evicted from a flat in the outlying Lorenteggio area. Five police officers were injured in the clashes and two protesters were arrested on charges of violence, resistance and injury.
Milan city council condemned Monday's violence but said it would not stop it from pursuing the evictions. "We are already working, and will continue to work to solve a complex problem that sees us in the front line in the fight against illegality but also to provide answers to the housing emergency expressed by this city," said Daniela Benelli and Marco Granelli, the councillors responsible for housing and security. "However, let it be clear to all that the social protection of fragile people and families in need has nothing to do with people who use violence to prevent occupied housing from being freed up and with those who shamefully speculate on the desperation of others to fuel the racket," they added. "Milan city council is committed to restoring legality, livability and dignity to its working class areas," concluded the councillors. However, many families who illegally occupy social housing say they are forced to do so because of the length of waiting lists to obtain a flat via the proper procedures.
Also on Tuesday, around 100 residents of Milan's San Siro area gathered in Piazza Selinunte to protest against the evictions. "We have been going for a week and we will continue further," said Paola, a spokesperson for the movement, who did not give her surname.
"This morning, we gathered at 7 am and after having breakfast together - an excuse to meet and talk - we organised a sale of second-hand items. "We want to help each other, not continue this war among the poor," she added. Meanwhile, Transport and Infrastructure Minister Maurizio Lupi of the minority government partner New Centre Right (NDC) praised the latest evictions. "Legality is finally being restored with respect to housing and illegal occupations in Milan, and the violent reactions of the usual suspects will not stop it happening," Lupi said. "Just as we are making big efforts to help those experiencing the housing emergency, with the rental and arrearage funds and the 500 million euros allocated under the Housing Plan to renovate public housing premises, we must ensure that the rights of those who really are in need are not trampled by illegal occupants," he continued.
The government of Democratic Party (PD) leader Matteo Renzi has made tackling Italy's chronic housing shortage a top priority with the allocation of nearly two billion euros to renovate existing public housing and build new structures in particular.
The so-called Housing Plan, approved by parliament in May, also contain measures in support of house rentals at a previously established price (canone concordato) rather than at the market rate, including a lower flat rate of taxation on rental income for property owners, and tax breaks for social housing tenants.