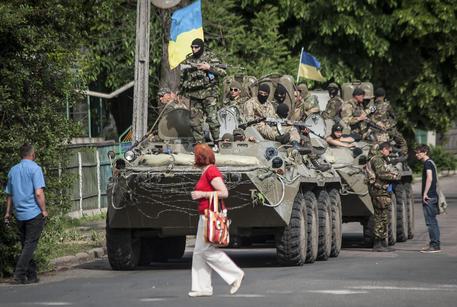 (ANSA) - Rome, November 17 - German Chancellor Angela Merkel on Monday warned that the conflict in Ukraine could grow to involve surrounding countries, while Russian President Vladimir Putin advocated for the federalisation of Ukraine in an interview with German TV network ARD.
Speaking from Sydney following the G20 summit in Brisbane at the weekend, Merkel said that the Ukrainian crisis could affect Moldavia, Georgia, and even go as far as Serbia and the western Balkans should the crisis grow.
Meanwhile, Putin advocated for federalisation for Ukraine, a move that would give individual regions more independence in politics and decision-making as opposed to the central government in Kiev.
"I don't understand why some political forces in Ukraine are against even hearing about federalisation," Putin said. "The people who live in these territories must feel like it's their homeland, no matter what language they speak".
Ukrainian Foreign Minister Pavlo Klimkin and EU foreign policy chief Federica Mogherini signed an agreement on Monday to launch operations on December 1 for the EU Advisory Mission (EUAM) Civilian Security Sector Reform in Ukraine, aimed at reforming security and civil defense systems within the country.