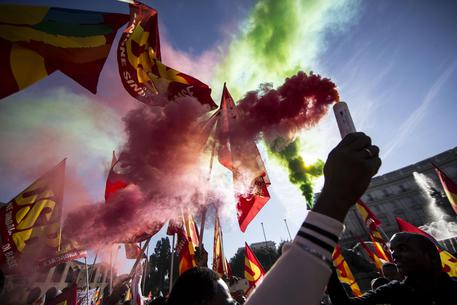 (ANSA) - Rome, November 14 - There was violence in Milan and Padua on Friday and a group of demonstrators scaled the Colosseum in Rome, as thousands of people took to the streets of Italian cities as part of the so-called social strike protests. The social strike demonstrations included smaller, more radical left-wing union federations, students, teachers, workers calling for job security, and migrants.
Some three thousand students marched in Naples, while in Milan, a big rally was staged by Italy's biggest trade union confederation CGIL and its metalworkers' arm FIOM, which is staging a strike in northern Italy. Transport strikes in many parts of the country added to the disruption for the public. The Rome protest featured members of COBAS and USB union federations demonstrating against the government's Jobs Act labour reform and budget measures, people demanding more social housing, students, migrants and refugees.
At the Colosseum a group of around 10 workers from a private firm climbed up restoration scaffolding and hung banners reading "No Jobs Act" and "No privatization of public services". A march in the capital started with eggs and fireworks being throw at the economy ministry, while at the education ministry, students and teachers organized a sit-in to demand a meeting with Education Minister Stefania Giannini.
"Better work conditions and work for all," read their banner.
A number of police officers were injured in Padua during clashes outside the northern city's university. The violence took place when members of the march tried to make towards the local offices of Premier Matteo Renzi's centre-left Democratic Party (PD). In Milan, police fired tear gas and charged at students who had tried to break a police cordon. The students responded by throwing bottles, flares and other objects. In Naples, protestors blocked traffic on the southern city's ring road.
In Bologna, students, workers, and Cobas union members staged two marches through the city, disrupting traffic as residents grappled with a transportation strike.
In the southern city of Bari, approximately 1,000 people took part in a march organized by COBAS and USB union federations as well as the USD student union and firefighters.
Puglia has 400 firefighters on short-term contracts, which expire December 31 and may not be renewed.
"They fooled us by assuring us we would all get hired on permanent contracts, but how will we support our families?" said one firefighter at the head of the march. "This social strike is a grassroots action by students and workers against (the government's) Unblock Italy decree, which institutionalizes job insecurity," organizers explained.
In Venice, a small social strike march took place to denounce the exploitation of workers on short-term contracts in the fashion industry.