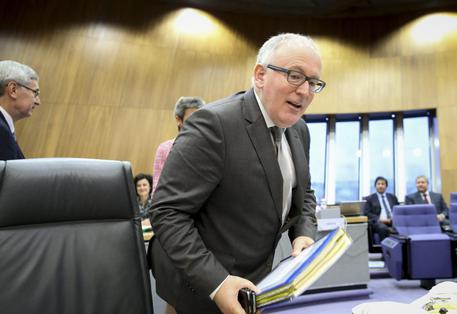 (ANSA) - Brussels, November 10 - Jean-Claude Juncker, president of the European Commission, defended himself Wednesday from criticism of the tax regime he oversaw in Luxembourg, saying processes there were "always legal".
"In all my life, I have worked to promote tax harmonization in Europe," Juncker said after attacks earlier in the day from Beppe Grillo, leader of the anti-establishment 5-Star Movement (M5S) who was in Brussels for meetings.
Grillo attacked Juncker over his time as prime minister of Luxembourg, a country that has drawn recent media attention for what some call legalized tax avoidance.
Multinational corporations have moved their headquarters, at least on paper, to the small state to avoid paying taxes in countries where they operate.
Many corporations currently arrange their affairs to avoid paying taxes in jurisdictions where they earn millions in revenues.
"Who elected Juncker? He is the former minister of a tax haven," said Grillo, using the term that many have applied to countries where businesses can find lower corporate tax rates.
Juncker expressed surprise at Grillo's remarks, saying the tax practices in Luxembourg, where he was prime minister from 1995 to 2013, have been declared legal by the European Commission.
He added there was no conflict of interest as he became president of the Commission only a few weeks earlier.
"I do not (understand) the headlines," and the resulting controversy, said Juncker.
Information about the tax deals reached in Luxembourg with major multinational corporations, accused of cross-border tax avoidance, were leaked several months ago.
As many as 30,000 documents were among the so-called 'LuxLeaks'.
The broader issue of corporate tax avoidance drew scrutiny in September when the Organization for Economic Cooperation and Development (OECD), working with the G20 nations, agreed on draft measures to deal with multinational firms seeking to circumvent taxes by moving some operations to low-tax nations.
The proposed measures were designed to ensure big multinationals shoulder a greater share of the tax burden.
Current international tax rules and treaties among nations have not kept pace with developments in the digital economy and innovations that have allowed tax avoidance, the experts say.
Work on combating tax avoidance began two years ago and in mid-2013, as part of the OECD project, the Italian government calculated that profitable multinationals including Amazon and Facebook had together paid just one million euros in taxes in 2012.
Google has also been frequently named as an organization that avoids paying taxes through an intricate series of holding companies.