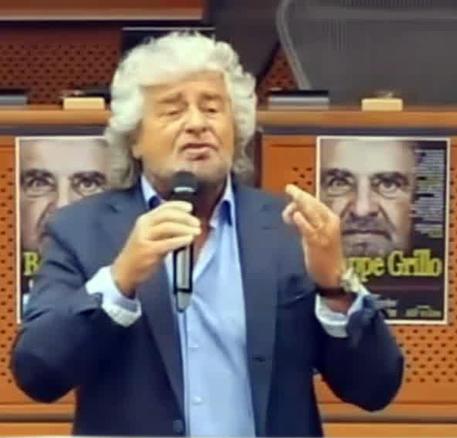 (See related) (ANSA) - Brussels, November 12 - The European Central Bank is a greater foe than Islamic militant group ISIS, said Beppe Grillo, leader of the 5-Star Movement (M5S), as he headed for a meeting Wednesday with the president of the European Commission, Jean-Claude Juncker.
"We are not at war with ISIS or with Russia, but with the ECB," said Grillo.
The M5S leader was planning to present his campaign for a referendum on pulling Italy out of the single-currency euro to the European Parliament in Brussels.
"We are tired of the sacrifices, we want to regain sovereignty over our currency, (and) save our businesses," said Grillo.
He also attacked Juncker over his time as prime minister of Luxembourg, a country that has drawn recent media attention for what some call legalized tax avoidance.
Multinational corporations have moved their headquarters, at least on paper, to the small state to avoid paying taxes in countries where they operate. "Who elected Juncker? He is the former minister of a tax haven," said Grillo, using the term that many have applied for countries where businesses can find lower corporate tax rates.