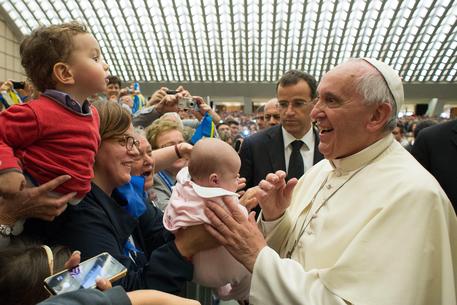 (By Paul Virgo).
(ANSA) - Vatican City, November 11 - The Vatican said Tuesday that Pope Francis has created a new judicial body within the Congregation for the Doctrine of the Faith to focus on the most serious crimes, including child sex abuse, and streamline Church procedures in such cases. The new body dealing with appeals by clergymen accused of the most serious crimes (delicta graviora) will be made up of seven cardinals or bishops chosen by the pope. Vatican spokesman Father Federico Lombardi said there is currently a backlog of cases with the Congregation and the pope's plan "was well received and is considered a good solution" to the backlog.
Francis has shown he is serious about tackling the problem of sex abuse of minors by members of the clergy since taking the helm of the Catholic Church, whose image has been tarred by a series of scandals in various parts of the world.
He has defrocked several senior priests and in September he had a former archbishop, Pole Jozef Wesolowski, arrested in the Vatican on charges of allegedly abusing children.
The arrest was the first inside the Vatican for alleged paedophilia.
Sex-abuse cases, many of which emerged during the papacy of Francis' predecessor, Benedict XVI, have cost Catholic dioceses and religious orders around the world billions of dollars in legal fees and settlements.
Francis has apologised for the abuse several times.
He also stiffened the punishments in the Holy See's law on paedophilia and set up a special commission to advise him on how the Catholic Church should protect children and help victims of sexual abuse by the clergy On Tuesday Pope Francis also urged leaders of the G20 nations meeting on the weekend in Brisbane to take measures to protect people from financial abuse of the sort that led to the global crisis that began in 2008. He criticised "speculation lacking political or juridical constraints and the mentality that maximization of profits is the final criterion of all economic activity - a mindset in which individuals are ultimately discarded will never achieve peace or justice".
In a message to Australian Prime Minister Tony Abbott, host of the summit, the pope also called on the G20 to press the United Nations to stop "the unjust aggression in the Middle East" that especially affects religious and ethnic minorities.
Francis visited the region earlier this year.
It was a busy day for the Argentine pontiff, who also returned to the theme of the importance of work in a new tweet on Tuesday. "Work is so important for human dignity, for building up a family, for peace!" wrote the pope in a message on his nine-language @Pontifex Twitter account.
http://popefrancisnewsapp.com/