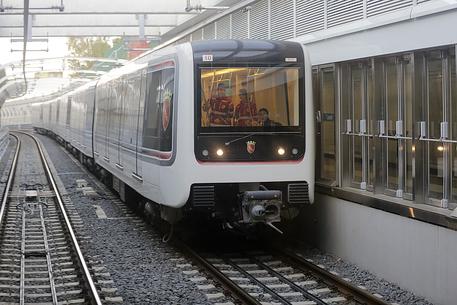 (ANSA) - Rome, November 10 - The debut on Sunday of Rome's third underground line, Metro C, was marred by a technical problem that caused its first passengers to disembark, wait about 11 minutes, and then board a different train, sources said Monday.
Metro C, unlike Rome's A and B lines, is a driverless system whose first tract went into service Sunday, traveling from the eastern Rome neighborhood of Centocelle to the eastern station of Pantano, nearly 13 km away.
Rome's executive councillor for public transport, Guido Improta, said a software error was responsible for the first train stopping four stations short of its final destination.
The train did reach Pantano after the delay,and trains ran smoothly for the rest of the day.
A university student among the first passengers said, "It's fantastic. It seems like we're in a European capital city".
Not everyone was as enthusiastic, however.
Italian consumer group Codacons cited elevators and escalators that were out of service, uncomfortable seats with little legroom, and excessively high temperatures in the train carriages.
Rome Mayor Ignazio Marino rode the line on Sunday with Rome city councilmembers.
Metro C has been under construction for seven years and construction isn't expected to be fully complete until 2020.
The inauguration was originally scheduled for October 11 but was delayed almost a month due to technical problems with the driverless software program.