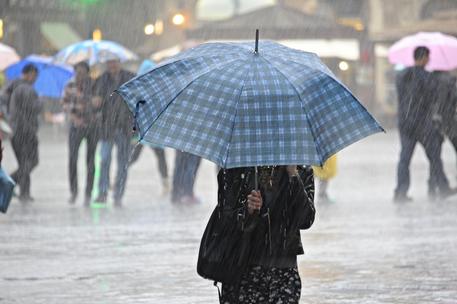 (ANSA) - Rome, November 7 - Much of Italy remained on maximum weather alert on Friday amid a cyclone warning for Sicily and torrential rainfall that forecasters said may take a brief pause on the weekend before resuming next week.
Forecasters said a tropical cyclone was on course to hit the Sicilian coast later Friday and its trajectory "is not precisely foreseeable," Italy's civil protection department said. Measures were being taken to cut risks by preventing people leaving their homes and workplaces, it added.
Schools in Rome reopened as the level of alert was lowered from red to orange, but students in other parts of the country, including the city of Frosinone near the capital and Catania in Sicily, had the day off as a precaution with storms forecast to arrive.
Despite the alert reduction in Rome, floods caused one metro station to close on Friday after four were temporarily shut on Thursday, and a pedestrian was hurt when a tree struck her amid torrential rain in the Appian Way area.
The bad weather also contributed to major traffic congestion in Rome, although the feared mayhem from forecast "water bombs" of torrential rain did not materialise.
This triggered debate over whether the authorities' decision to close Rome's schools and monuments on Thursday was excessive.
Still, the situation was severe enough that the city's fire-fighters were called to about 150 emergencies linked to the weather overnight. And part of a famous Risorgimento landmark in Rome crumbled because of torrential rain Friday, city fire services said.
Water infiltration loosened bricks and plaster near the breach at the Porta Pia city gate in the former Vatican-owned walls where Risorgimento troops poured in to free the city in September 1870, completing the unification of Italy.
Some light rain was predicted for Saturday, but Sunday was expected to bring in sunny skies especially through the south as a high pressure system will extend over southern and central regions, according to forecasters.
"It will get better over the weekend where we will have more glimpses of sunshine, but the rain will always be waiting in ambush," said Francesco Nucera, meteorologist with 3bmeteo.com. "You cannot talk about a real improvement; the lull will be temporary," added Nucera.
In particular, a new Atlantic disturbance was expected to roll in late Sunday bringing light rain to Piedmont, Lombardy and the west coast of Liguria.
Looking ahead to next week, forecasters see more heavy rains especially in Liguria and northern Tuscany while the rest of the country should see temperatures return to above average with few clouds.