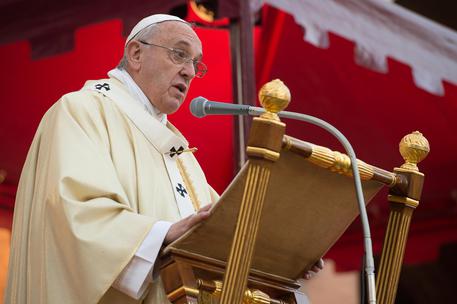 (ANSA) - Vatican City, November 5 - Pope Francis on Wednesday told participants in a course on canon law that the Vatican justice system must "beware" of letting marriage annulments "stray into the realm of business", as some "public scandals" have shown.
Francis went on to recount that he sacked a Church official for selling marriage annulments.
"I had to dismiss a person...who some time ago said: '$10,000 and I'll do both the civil and ecclesiastical procedure'," the pope told participants at the Apostolic Tribunal of the Roman Rota, which is the Catholic Church's highest appeals court.
"Please, this must not happen!" the pope entreated his audience. "There are always those in the Synod that propose we should charge a gratuity...but when spiritual interests go hand in hand with economic ones, that does not belong to God. Mother Church has the generosity to mete out justice free of charge. This point is important: detach the two".
The pope went on to recall one of the themes under debate at the bishops' Synod on Family held October 5-19.
"There was concern about streamlining marriage annulment procedures" while following a policy of "justice as well as charity" towards those who have been awaiting a ruling for years, the pope said.
"Even before the Synod, I set up a commission to come up with a policy that would be just but also charitable, because there are so many people that need to hear from the Church on their matrimonial status," Francis said.
"Some procedures are so lengthy or so difficult that people just give up," he said. "They say 'God understands me and I will go on as before, with this burden on my soul'. But the Mother Church must mete out justice...so that they can live their lives without this doubt, this darkness in their souls".
The pontiff ended his speech by thanking participants for taking the course. "We must always study and move forward and always seek out the soul's salvation, which is not necessarily found outside the realm of justice, but rather, along with justice," Francis said.
http://popefrancisnewsapp.com/