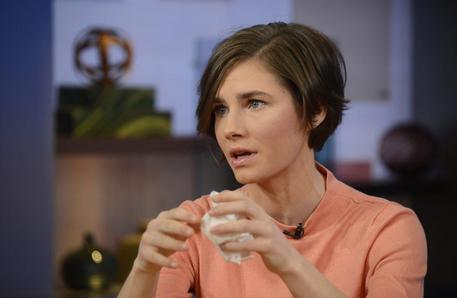 (ANSA) - Rome, November 5 - Amanda Knox is working as a cub reporter for a small daily in her native Seattle less than a year after being reconvicted of the 2007 murder of Perugia flatmate Meredith Kercher, the Daily Beast reported Wednesday.
The West Seattle Herald has been employing her for a few months as a freelance reporter, but not because of her notorious status, Web Editor Patrick Robinson told The Daily Beast.
"We approached her originally to give her the opportunity of a normal life," Robinson said. "We simply asked her as we would ask anyone of that age and stage, if they would be interested in writing for us as a qualified writer of that scale and this level of journalism".
As for the murder charges against Knox and Italy's possible future request to extradite her, Robinson said that was not the newspaper's concern. The outcome of the case has "little to nothing" to do with Knox's relationship with the newspaper, he said.
"It's really about giving a young, talented writer an opportunity at a normal life." In November 2007 Knox's flatmate Kercher was found dead in the house they shared with two other women. Authorities arrested Knox and boyfriend Raffaele Sollecito and charged them in Kercher's murder. In 2009 Knox and Sollecito were found guilty of murder. Both spent four years in prison before a court acquitted them in 2011 after evidence was thrown into doubt by independent experts. Knox returned to the U.S. following acquittal, but a court in January 2014 upheld the 2009 guilty verdict and sentenced Knox and Sollecito to more than 25 years. Knox, who had started to study creative writing when she went to Italy in September 2007, has not been extradited to Italy while the case is appealed.
Knox was allowed to write under a pen name fo the Herald at first.
"That was purposely to give her the protection of that and to give her the opportunity. She showed us writing samples and they were good," Robinson said. After she "got her feet wet," Knox began writing under her own name.
Knox is covering everything from human-interest stories to local theater like a high-school production of Tom Stoppard's Rosencrantz and Guildenstern Are Dead.
"Amanda's a very bright, very capable, highly qualified writer," Robinson said, adding he was "flabbergasted" by how good her photography had become over a few months. "She's certainly been through as lot and been very easy to work with and very interested and eager in doing stories." The Herald was obviously aware that their newest freelancer - an international celebrity and convicted murderer - would eventually generate outside attention. There was "some note of caution" attached to hiring Knox, thanks to the negativity from the case, Robinson said. But that wasn't why the paper hired her, he insisted.
"It doesn't matter what people say or think - the truth is that she's a West Seattle resident, she grew up here," Robinson added. "Why not give her the opportunity to be an actual human being versus a celebrity?" That celebrity may attract unwelcome visitors, like people with cameras, but Robinson said all meetings with Knox are conducted privately. Though "she's not hiding," he added.