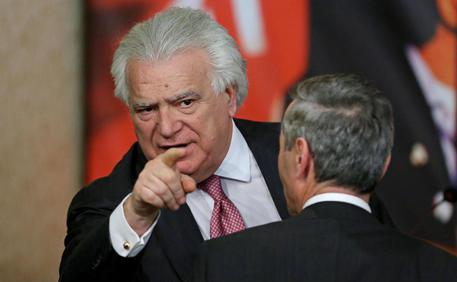 (ANSA) - Rome, November 3 - Forza Italia Senator Denis Verdini, a close aide of ex-premier Silvio Berlusconi, and former economy ministry undersecretary Nicola Cosentino were sent to trial on Monday for alleged involvement in a secret cabal, the so-called P3, that sought to condition some State bodies. Verdini faces corruption charges.
Cosentino, who was arrested earlier this year in one of a series of cases against him, including suspicions of mafia links, is accused of defamation and "private violence". He was allegedly involved in the publication of false reports on a blog about Campania's current centre-right Governor Stefano Caldoro - an alleged attempt to discredit Caldoro before the 2010 regional elections.
Cosentino, a member of Berlusconi's Forza Italia (FI) party like Verdini and Caldoro, also alleged "carried out acts aimed at forcing" Caldoro to drop his governorship bid. The case against another former Berlusconi aide, Marcello Dell'Utri, was shelved by a Rome judge.
Former Senator Dell'Utri is in prison after a definitive seven-year sentence for Mafia links was upheld by the supreme court this year.
The case against Dell'Utri was dropped due to a technicality over the extradition procedure from Lebanon, where he had fled to before the supreme court's decision, ANSA sources said.