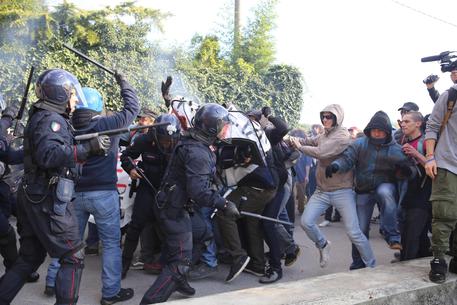 (ANSA) - Brescia, November 3 - There were moments on tension on Monday in Brescia, with police clashing with people protesting against Premier Matteo Renzi. A group of protestors tried to break through the police line to get close to the building where Renzi was speaking to local industrialists in the northern city. The police responded by baton charging the protestors.
The ugly scenes come after clashes last week in Rome between police and workers from AST steel in Terni protesting against redundancies - an incident that sparked a major furore.
Renzi, meanwhile, said that Italy has reached a "now or never" moment to end its recent economic decline. "An amazing opportunity has opened up and it would be a very serious mistake not to take it," Renzi, who won an endorsement for his ambitious reform agenda when his centre-left Democratic Party (PD) won over 40% of the vote in May's European elections, told the entrepreneurs in Brescia. "If we do what we are capable of doing, Italy will be the locomotive of Europe in the coming years. "But we have to have the courage to say the time of doing things later is over. It's now or never. That is the sense of urgency my government moves with".
Earlier in the day, Renzi warned trade unions and opponents within the PP to his Jobs Act labour reform that he has no intention of giving any ground. "The union does its job and good luck," Renzi told Mediaset TV. "We are going to keep going because our aim isn't to wage a political battle, but to get Italy going again and we won't give up a millimetre on this".
Renzi added that he was willing to use a confidence vote in the Lower House to help push the legislation through after it cleared the Senate. On Sunday the premier said he was not losing sleep about the prospect of some PD members defecting rather than voting for the Jobs Act, which features a controversial move to weaken the laws on unfair dismissal.