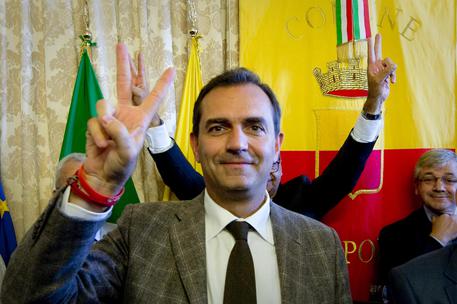 (ANSA) - Naples, October 30 - Former headline-grabbing prosecutor turned leftist politician Luigi de Magistris got his job as Naples mayor back pending an appeal to Italy's top court Thursday.
"I'm overcome with emotion," de Magistris said.
"This is a long-awaited decision", said the mayor, who denies all wrongdoing in an abuse-of-power case stemming from his former career.
De Magistris said he would continue to be "a mayor in the streets" and dubbed the affair "surreal".
"Over the last month I have been almost exclusively in the streets," he said.
"That has regenerated me and will mark a watershed in the way I'll perform my duties over the coming months.
"It's better to be among the people than in the palazzi of power," de Magistris said. However, soon afterward he took back his old seat at city hall, presiding over a session that dealt with "sundry business", local sources said.
De Magistris returned to provisional power after the Campania Regional Administrative Court (TAR) referred his suspension to the Constitutional Court, restoring him to office pending the outcome. De Magistris was suspended October 1 after receiving a suspended 15-month sentence for abusing his power to order unwarranted wiretaps in his previous career as a headline-grabbing public prosecutor. He was suspended based on a law introduced during Mario Monti's technocrat administration in 2012 designed to fight corruption among public officials.
It was wielded in 2013 to eject ex-premier and then Senator Silvio Berlusconi from parliament after he received a suspended four-year sentence for tax fraud.
De Magistris is currently the target of a fresh probe into tampering with the America's Cup which took place in the southern Italian city last year.
News that his appeal was ruled admissible was greeted with applause and shouts of joy at his office in city hall, where councillors crowded to congratulate him.
The head of the Campania TAR, Cesare Mastrocola, said "it was an enormous task, given the complexity of the issues before us".
When he was suspended, de Magistris said Italy is a "sick democracy" and there is "a long way to go to stop it becoming a regime".
He voiced the hope he would serve a suspension of "just 3-4 months", until his appeal verdict comes out, instead of the longest term possible, 18 months.
He reiterated he had no intention of resigning.
The former prosecutor, convicted of ordering unauthorised wiretaps of politicians including former premier Romano Prodi, claimed justice had been hasty in his case.
"They served the order to (Raimondo) Pasquino, (president of the Naples city council assembly), when he was in his pyjamas last night.
"What did they think, that I was going to try to escape?".
De Magistris said the sentence was part of a plot to wrestle control of Naples from him.