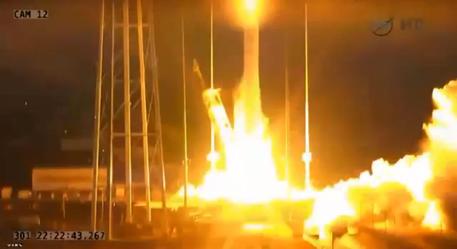 (ANSA) - Moscow, October 29 - The Russian space agency on Wednesday offered an emergency launch of provisions to the International Space Station (ISS) after the explosion of an American, unmanned resupply rocket.
"At the moment we have not received a request, but if we do, we are ready," the Russian space agency told Russian news wire Ria Novosti.
A NASA rocket, loaded with 2.2 tons of supplies for the six astronauts living aboard the ISS, blew up six seconds after take-off on Thursday. NASA said the rocket's cargo was not crucial to the crew, because the Russian space agency was proceeding with a launch of its own provisions on Wednesday. The cause of the blast is still unknown. No injuries were reported.