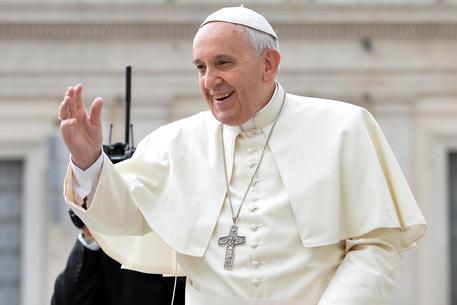 (ANSA) - Vatican City, October 28 - Pope Francis said Tuesday he was not a Communist as some admirers and critics have suggested but simply following Jesus's Gospel call to love the poor.
Francis said had been called "a Communist" for speaking of "land, work and housing" but "love for the poor is at the centre of the Gospel" and the Church's social doctrine. The pontiff also spoke out in defence of workers' rights, calling on grass-roots movements to "keep up the fight". "It does us all good," Francis said. "Let's say together with our heart: no family without a roof, no peasant farmer without land, no worker without rights, no person without dignified labour!" the pope added.
Grass-roots movements "express the urgent need to revitalise our democracies, which are often held hostage by numerous factors", Francis said.
It is "impossible" to imagine "a future for a society without the 'protagonistic' participation of the great majority" of people, the pope added. Francis urged an end to "paternalistic welfarism" as a condition for peace and justice and called for the creation of "new forms of participation that include the grass-roots movements" and their "stream of moral energy". Since his election on March 13, 2013, the Argentine-born Francis has captured the imagination of billions of people with his simple, folksy style, happy smile, and his willingness to speak out on concrete issues of poverty, social justice and human rights.
The much-photographed pontiff has been recorded washing the feet of juvenile convicts, including young men, women, Muslims and Catholics; and embracing a man with a deformed face who braved the crowds that throng St. Peter's Square these days to see the former archbishop of Buenos Aires.
Francis was named Time magazine's Person of the Year for 2013 for forceful moves to re-energize the Catholic Church, reform its management, widen its appeal, focus on social rather than doctrinal issues, and renew a drive against clerical sex abuse.
"He took the name of a humble saint and then called for a church of healing," Time said on its cover, dubbing Francis "the people's pope" who it says has already become a "superstar".
Rolling Stone magazine has also put the 77-year-old Francis on its cover, saying "the times they are a-changing" amid Francis's "gentle revolution".
The pontiff also appeared on the cover of The Advocate, an American magazine focusing on gay, lesbian, bisexual and transgender issues.
Francis, who has forcefully rejected the superstar label - as well as a string of Pope-as-Superman frescoes by street artists - has also won converts for his reform plans for the Vatican Bank and willingness to accept individuals whose lifestyles have traditionally been condemned by the Church.
"He is quoted saying of women who consider abortion because of poverty or rape, 'who can remain unmoved before such painful situations'?" noted Time magazine.
Of gay people, he said, "If a homosexual person is of good will and is in search of God, I am no one to judge".
A recent synod on the family in the Vatican was viewed with hope by those expecting it might approve Francis's liberal statements.
But in the end it only obtained a simple majority - not the two-thirds required to change stances - on accepting gays and giving sacraments to divorced and remarried Catholics.
http://popefrancisnewsapp.com/