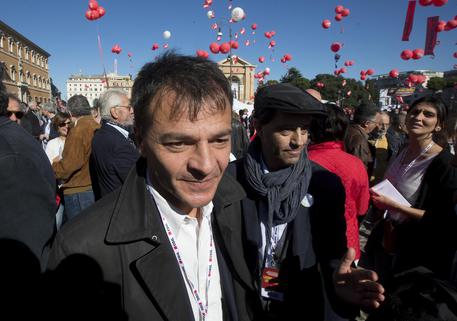 (ANSA) - Rome, October 27 - Left-wing dissenters within Premier Matteo Renzi's Democratic Party (PD) took pains Monday to distance themselves from the possibility of splitting away from the ruling center-left party.
Renzi launched a stinging attack on the dissenters after several took part in a massive rally in Rome organised by the left-wing CGIL trade union federation, which has historic ties with the PD but is against the government's Jobs Act labour reform.
The Jobs Act would soften the rules on unfair dismissal to encourage firms to take on staff, which labor says is just another way to scale back workers' rights without creating jobs.
Renzi won a Senate confidence vote on the bill earlier in October.
"I want to fight my battle from within the PD rather than forming a small, splinter extreme-left party," said Lower House MP Cesare Damiano, a former labor minister during the Romano Prodi government of 2006-2008.
"I won't vote for the Jobs Act in a confidence vote, but I'm not leaving the PD," said Lower House MP Stefano Fassina, who was junior economy minister during the preceding, short-lived administration of fellow PD member Enrico Letta.
"Given that the premier is systematically seeking out a head-on collision, I believe (he is looking) for an incident to justify snap elections".
Fassina was echoed by Pippo Civati, who came in third against Renzi in the 2013 PD primaries for party secretary and candidate to the premiership.
"Renzi is steering us to (another general election) otherwise he would not have engaged in a duel on such a scale with his own party," Civati told La Repubblica newspaper, adding that he is still on the fence about whether or not to leave the PD.
"I will decide in the coming weeks," he said.