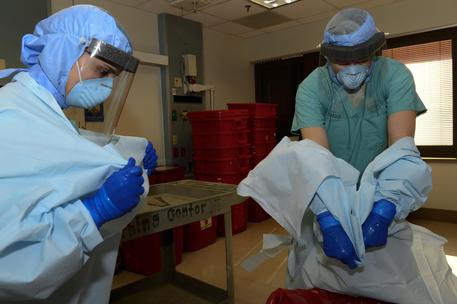 (ANSA) - Milan, October 24 - Two Italian health workers were placed under quarantine in Lombardy after being repatriated from Sierra Leone last week, a report said Friday.
The 60-year-old doctor and 30-year-old midwife were flown home after suspicion they had been exposed to the deadly Ebola virus during a humanitarian mission to Africa, according to newspaper Il Corriere della Sera. Neither doctor presents symptoms. Quarantine is precautionary. The doctor and obstetrician worked from June through last week with the association Medici con l'Africa Cuamm in Pujehun, Sierra Leone - one of the three African countries worst hit by the devastating Ebola outbreak. The pair were exposed to the risk of contagion during their work due to a breach in health protocol not of their own doing. Both must remain isolated in their homes until early November.
Cuamm called the quarantine "standard procedure that one follows in these cases".