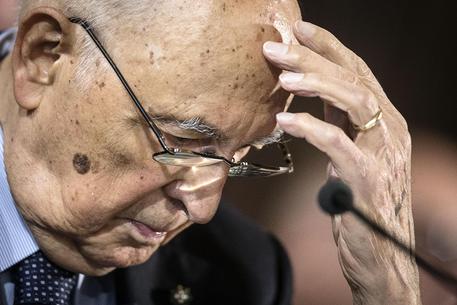 (ANSA) - Palermo, October 24 - The lawyer of jailed Cosa Nostra boss Totò Riina will be able to question President Giorgio Napolitano when the head of State gives evidence on October 28 to a trial into alleged negotiations between the Mafia and the State, a Palermo court ruled Friday. However, the court stressed that Napolitano's consent was "essential" for Riina's lawyer to question him, due to his Constitutional prerogatives as president. It upheld a request from Riina's defence lawyer, Luca Cianferoni, to ask Napolitano about events in 1993 and 1994, and therefore issues different to those originally stipulated by the judges. Napolitano will give evidence to the trial from the presidential palace in Rome. The trial is into alleged negotiations to stop a series of Cosa Nostra bomb attacks in the early 1990s that claimed the lives of anti-Mafia judges Giovanni Falcone and Paolo Borsellino in 1992, and continued with fatal bombings of art sites in 1993.
Riina, who is known as the 'beast' as he is the bloodiest Cosa Nostra boss in history, is among the defendants, along with fellow top mobster Leoluca Bagarella.
Nicola Mancino, a former interior minister and Senate Speaker, is also on trial for alleged perjury, which he denies.
Napolitano was originally called to give evidence about a letter he received in June 2012 from a legal advisor, Loris D'Ambrosio.
In that letter D'Ambrosio, who died shortly after writing it in July 2012, said he had always acted correctly, while expressing fears that there may have been negotiations between the State and Cosa Nostra two decades ago.
The president said he had had no communication from D'Ambrosio that was relevant to the case, but the court said in September that he had to give evidence anyway.
Earlier this month, the court rejected a petition for Riina and Bagarella to participate via a video link from jail when Napolitano gives evidence. In addition to Napolitano, the Palermo court has also accepted prosecution requests to call up a host of other witnesses, including Senate Speaker and former national anti-Mafia prosecutor Pietro Grasso.